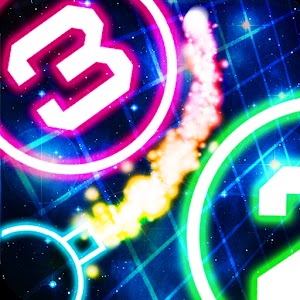 The critically acclaimed hit-game for your Device! Get this amazing -thumb experience and see for yourself. ORBITAL is an addicting and challenging puzzle game with just one goal: score points by destroying orbs. A simple puzzle game for everyone! Enjoy the beautiful visual effects, the great sound and of course the addicting gameplay anytime in short sessions.
Orbital has until now won several prices and was among the top ten games in Japan, Norway, Switzerland and other countries. The New York Times mentioned it as one of those applications making your smartphone magical and featured it as one of the games which are worth downloading. So what are you waiting for? Give it a try!
-
FEATURES
- Single & Two player mode
- 3 game modes: Gravity, Pure & Supernova
- enhanced with haptic feedback powered by Immersion
- Beautiful particle effects
- All-time & 4 Hours online Leader board
- Facebook connection: Compare with your friends on Facebook
-
Awards and Prizes:
*Game of the Year denki.co.uk
*Winner DiscoveryBeats Apps Contest
*Silver Award pocketGamer.co.uk
- AWARDS TOP RATED
- jayisgames.com SILVER AWARD
- pocketgamer.co.uk
- WHAT THE CRITICS SAY
A picnic to understand, but a marathon to get beyond the first few minutes, Orbitals simple style is perfect for those looking for fill the odd spare moment. 0
- Keith Andrew (pocketgamer.co.uk)
While there are already a few games that share the same gameplay mechanics as Orbital, none of them look anywhere near as cool.
- Eli Hodapp (toucharcade.com)
BitForge has managed to combine the addictive gameplay of Peggle and the beauty of Geometry Wars, two digital forms of crack, into one easy to use package.
- Chad George (thatvideogameblog.com)
Orbital takes simple gameplay and dresses it up with a unique “gravity” feature and enhanced graphics. The game can be very frustrating at times, but that won’t keep you from coming back for another try. 5
- Will Raskin (8apps.com)
Orbital has got fantastic graphics and unfussy features. Come to think of it, there are really no negative points about the game. Good going, Bitforge! 5
- Yoyo (iphonefootprint.com)
-
GAMEPLAY
Shoot the colorful orbs onto a grid. As soon as the orb stops it will grow until it hits an obstacle (wall or another orb on the playing field). Now you have to shoot the orb several times with the following orbs until it’s destroyed. Every destroyed orb grants you one single point. You could collect endless points but there is one difficulty: The shot mustn’t hit the death line above the cannon. If it does, the game is over! How many points can you get? -
ORBITAL is based on Gimme Friction Baby by Wouter Visser.

Author: NeonKnight
This article is written by NeonKnight. Please leave comment if the link is broken. Thank you!

Alarmy (Sleep If U Can) - Pro
Offered By Delight Room Co., Ltd